“An action/adventure rollercoaster of a suspense thriller.”

“[The] material is well researched, evidenced by the detail written into characters, locations and action…from prop pockets on a Hatteras to the pearls of a bridal gown. [It’s] a terrific story… and J.C. Hager is a skilled storyteller.”

What a fantastic book.

“When I finished J.C. Hager’s first book, Hunter’s Choice, I asked the author, ‘Where’s the next one?’ I finally got my eyes on Hunter’s Secret and got by on little sleep until I’d read it. The locales depicted are bang-on, the human characters are well-crafted and many return as the reader’s old friends. Now, John, where’s the next one?”

“An inspired, adventurous read I highly recommend. I can’t wait for his next book.”

“A powerful and intelligent thriller with enough action and suspense to fill three books!” 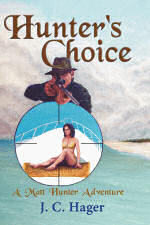 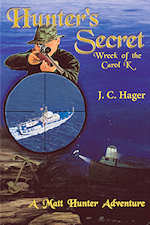 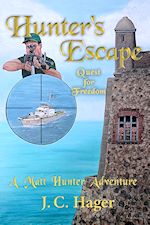 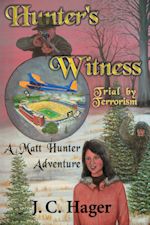 ATTENTION: This section doesn’t give away the endings of the books, but it could blunt some exciting parts. Reader discretion is advised.

Research to me is satisfying at worst and fun at best. It helps to be trained and schooled in science. My difficulty with research and the results of gathering information is the almost pathological need I have to tell everyone ALL I know, whether they find it interesting or not. Researching a book means you have to know ten times more than you write. The family tree is developed so dates match the characters and timelines. The physical locations have to be accurate. Crashing a plane or shooting a person in the head with a .22 isn’t something you do all the time. Hunting, diving, vehicles, weapons, clothes, climates, snow machines, small boats, hand to hand combat, going to a medical clinic, crossing the Gulf Stream and many locations of the book were all in my background and areas of knowledge. Cutting up a plane on an icy lake, operating a 54 foot Hatteras, the Dominican Republic, how to find and buy mortars, drugs and drug dealers, hiding from radar in an open boat, Russian, Spanish, shooting a helicopter and the DEA needed research.

Techniques and technical ability comes from interviewing people that worked with the objects in question. The Cessna 310 was picked because it has an icing history. I read an article called, “Ice Can Be Very Scary!!” by John Dohm. Also, a friend and pilot that flew the 310 before he became a 747 captain helped with the first chapter details. (See acknowledgement). Cutting up a plane knowledge came from watching a crashed Beachcraft Bonanza on the beach at St. Simon’s Island, Georgia. After they finally got the gasoline out of the bird, they chopped it up with cutters and circular metal saws faster than I can do a Thanksgiving turkey.

The Quarry (see web site info) and its surrounding lands were borrowed by Matt as his land. In reality it is owned, developed and lovingly protected by the Michigan Karst Conservancy, of which I am a member. I’ve walked and stalked its environs for forty years. The big tool building is still there and the crumbling remains of the crusher plant give a haunting aspect. I’ve mentioned Grandma McGillviray many times. She and her son and daughter gave me great information about the quarry’s history and romance.

The Keys were my favorite holiday and diving location for over thirty years. As a certified NAUI diver I spent many hours under the crystal clear water. Wonderful internet connections will give the interested researcher information and beautiful pictures of all the main diving areas. Check out the following site, it is the best:

My son helped with the yacht technology using his experience with large pleasure craft and piloting Tiaras all over Lake Michigan. My friend, the Master Chief in the USCG, knows all about go-boats, drug smuggling, Coast Guard equipment and techniques. The internet is the researcher’s mighty friend. The Reefer was a real boat with a different name, for sale in Florida, its MAN diesels and hooded prop wells are real, so is its speed, and most other parameters. These facts came right off the sales write-up. The big 150 foot yacht was modeled after one I saw on a Caribbean cruse. I took a picture of it coming out of Grand Cayman. I just knew it was bought with funds from money laundering and secret transfers through Pakistan. I yelled, “Shame on you,” but they didn’t seem to notice. It had a helicopter too.

The Dominican Republic was my most extensive amount of research. I went there three different years after publication. The villa is a real one, (Villa Vista del Mar,) advertised and complete with a multipage schematic. The coast line is all real. The flora and fauna are all chamber of commerce and biological tracts. I talked with several people who spent months on the coast I was writing about.

Ship logs are also on the internet. They can be funny, factual, introspective and supercilious. They can give the researcher important bits of information that makes the writing come alive. (“The anchors were fowled with sea weed and animal growth, meaning they have been there a long time…The current drove the lead boat sidewise and jammed it across the harbor entrance, when it was finally towed into harbor the wife walked off the boat with her suitcase.”)

Tides, moon phases, water temperatures, currents, harbor conditions are all available to the internet researcher. When they crossed the Gulf Stream, the moon was not over Miami, it was coming up south of Bimini. When they anchored in a Bahamian cove their tide levels were accurate by time and date. Local beers and foods came from travel logs, island literature, and travel guides. Recipes were all accurate from ethnic cookbooks.

The only firearm with which I was unfamiliar, never held one, was the Russian Dragunov; it is an AK sniper rifle. I have fired AK 47’s and own a Siaga 20 gauge- which is made at the AK plant. (Five 20 gauge shots from a detachable box magazine in three seconds- that will stop those pesky charging cotton tails.) Fortunately, there is a lot written about the Dragunov. I own the Remington rifle and Berretta .22 used in the story. I read a lot of incorrect terminology about firearms. When a shell casing is ejected from a revolver or person with a shot gun puts down his rifle, it grates on me. I spell SIG all caps because it is an acronym for Schweizerische Industrie Gesellschaft. (Same for the MAN German Engines on the Reefer.) You can buy mortars from South Africa. Shipping is no problem if you’re a crook.

I had a year (1965-66) of college Spanish. Professora Cardenas was my teacher- an attractive and talented woman. She and her daughters left Castro’s Cuba with her husband, the publisher of a Havana newspaper. Tanya has some Mercedes Cardenas in her. The Russian is from various translation tables that didn’t agree with each other. (Sorry Ivan.)

I went Hollywood on this subject. My brother and his son are experienced Marine helicopter pilots: a good friend and retired Marine gunship pilot all provided good information and terminology. Shooting a small civilian helicopter would surely ground it, but a fire and explosion might be a phenomenon.

The following WEB sites cover the major research areas investigated for Hunter’s Secret. Many hours were spent in discussions with master divers. The fire starting with a rifle was fun and frustrating, but it was possible. I have a Ruger LCP .380 and when Livingston missed at 12 feet it wouldn’t be unreasonable, it has the worst trigger pull imaginable and a 1 inch barrel. Being cold and wet in a cedar swamp isn’t new to me. Matt did a great job of getting warm and dry, and most importantly he kept calm and used the materials available to him — particularly his brain.

A wonderful WEB site showing the island and the efforts of his owner.

For a great aerial picture of the rugged island.

Law of Salvage and Law of Finds

http://www.rms-republic.com/reference/Volume67No1Article6.pdf
Too bad that all these law makers hadn’t gone down with the
ships.

Read about Mel Fisher and the Atocha– page 96.

A very friendly, dedicated, and knowledgeable man: not a nerd at all…

Beautiful ship- a shame to burn and sink it!

The Ojibwe call the lake Gichigami, meaning “big water.” Henry Wadsworth Longfellow wrote the name as “Gitche Gumee” in The Song of Hiawatha.

Books- read a lot or you’re in trouble.

Good pictures of the Tiki Bar and the Marina. One of only a few motels with a good walk-out beach area in the Keys. This was where the Reefer was moored.

National Park, jumping off harbor for the Reefer’s run south to Mexico.

You should read some of the comments from yacht travelers… “Clearing in — not for the faint of heart.” Tequila is the only answer!

Pick up a few Million US Dollars, find one of these men! I made up Momo — carefully…

Everything you need to know about the remarkable FN Five-seven semiautomatic.

I have seven large file folders holding the research for the novel: General, Islam, Grand Jury, Federal Courts, Radiation: PO 210, Covers. The internet is invaluable for research, a few sites of interest include:

The Koran by Rev. J. M. Rodwell is free to eBooks. There is an introductory chapter giving a history of the codification of the work, from verbal, Meccan idiom, in which Muhammad (pbuh) spoke, to the final Suras (chapters) known today as the Koran.

The Meaning of Islam: http://wiliislam.net/wiki/The_Meaning_of_Islam. A very worthy article. The triconsonantal root, SLM, used in the words, Muslim and Islam, are key to many Arabic words. SLM means, “Submission.”

The Religion of Peace, http://ww.thereligionofpeace.com/quran/023-violence.htm , this isn’t popular at the mosque!

The Federal Grand Jury and Federal Court procedures are very well covered in many internet treatments.

The Patriot Act is complex, easily found on the internet, pay attention to sections 203 (a) and 905 (a), relative to sharing of terrorist information.

Polonium 210 has rich coverage: Death by Polonium-210 by Doctors McFee and Leikin documents the death of Soviet spy Alexander Litvinenko. Al Jazeera has an article on Yasser Arafat’s poisoning. A good scientific summary on the deadly material is at:

The machine gun used in the novel is the FN P90. It is hard to describe, but very well documented at: