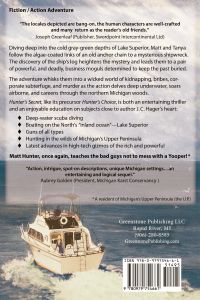 “When I finished J.C. Hager’s first book, Hunter’s Choice, I asked the author, ‘Where’s the next one?’ I finally got my eyes on Hunter’s Secret and got by on little sleep until I’d read it. The locales depicted are bang-on, the human characters are well-crafted and many return as the reader’s old friends. Now, John, where’s the next one?”

Diving deep into the cold gray-green depths of Lake Superior, Matt and Tanya follow the algae-coated links of an old anchor chain to a mysterious shipwreck. The discovery of the ship’s log heightens the mystery and locks them in a vicious struggle with a pair of powerful, and deadly, business moguls determined to keep the past buried.

Hunter’s Secret is set in the Upper Peninsula almost a year after Hunter’s Choice ends. It links the adventure and dangers of scuba diving with the joy of finding an undiscovered ship. The secrets they discover lead Matt, Tanya and her parents: George and Anita Vega into deadly encounters with two very rich and certifiably malevolent Canadian billionaires.

Finding treasure underwater is a totally wonderful experience. I found a greenish, flat edged coin on a coral shelf of a reef off Ocho Rios, Jamaica. Pirate booty, pieces-of — eight, glory, riches, Mel Fisher move over… but somewhere from its 25 foot deep home among sea urchins and brain coral heads — that coin turned into a fifty cent Jamaican coin dated 1986. I keep the coin around — because if you squint just right it becomes a whole world of adventures.

Finding an undiscovered whole ship is almost an indiscernible thrill. Learning that the laws of salvage take the treasure away as quickly as my green and brown coin went from pieces-of-eight to a worthless memento is a lesson learned by Matt and Tanya.

The business opportunity that the Canadian Brothers are working on is real, but not as far along as the book depicts. Nuclear waste disposal is the key to nuclear power development. It is essential our country develope nuclear technology to provide clean and constant energy to our ever energy using population. Father Frank M. Lenz, PhD is my inspiration for the technology and the technique of using subduction zones in the sea. He is working and meeting with many top politicians and scientists to help our country get to right thinking on the subject of nuclear power. Environmentalists tend to drive me crazy — they would have us riding horses, using windmills, worshiping sunsets while people starve, and revert to the lifestyles and life expectancies of the middle ages. For the record, the Toyota brake/throttle failures killed more people than the Chernobyl disaster — look it up — win a bar bet… 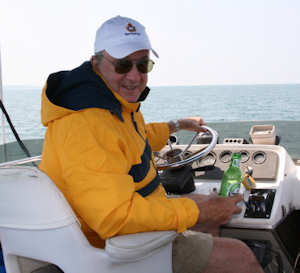 Both ships (boats) used in the novel are very real. The Ferr Play is the 4 Reel owned by very close friends — Archie and Warren — living in Paw Paw, Michigan. The 82 foot vessel is just a neat ship — vicariously adopted so I could own it in my mind for a short time. I spent a fair amount of time finding where the Coast Guard hid the tanks that held 1800 gallons of diesel fuel. I wrote and talked to several men that served on the ships — they would say, “Beats the hell out of me where the tanks are — I know where they put the fuel in — the tanks are down there somewhere…” I needed their location to plant the fire bombs. The official USCG schematics solved the mystery of the hidden tanks — they were walls — bulkheads separating the mess area from the engine room: thick walls, with an archway — plus a small third tank under the engine room.

Matt’s survival skills came from my many years of building fires. At age 6 — Buzz Sherman and I took my brother’s Boy Scout Manual — went to a forest edge near our rural home and learned to build different kind of fires from the diagrams — including the “cabin fire” used in the book. Later, my dad spanked me over his knee, outside on the back porch so the local fire fighters that were still putting out the multiacre field fire could see I was being instructed to be more careful in the future.

Starting a fire with a high powered rifle is difficult. I got two fires in nine tries — in the temperatures used in the book. I would suggest carrying a BIC or two.

The diving techniques and equipment were a result of a year’s study. I didn’t get too specific on some times and mixture percentages because of conflicting information.

My words were checked by master divers. I’d do a lot more reading and get serious-pay for it — instruction before I’d strap on 4 tanks and go down 150 feet into the ice age water of Lake Superior. The waters of the Caribbean are much friendlier — but you die by violations of the General Gas Laws: they don’t care where you dive.