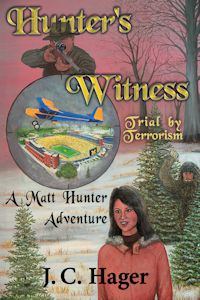 Amazon.com
Listen to a sample now: 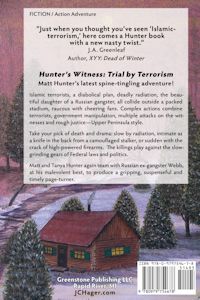 “Thriller fiction, wellresearched, nonstop action and a surprise ending. Each of John Hager’s books in the Hunter series keep getting better.”

The terrorist drone is accelerating down the grassy fairway of the golf course just south of the huge stadium which is packed with over 100,000 yelling fans. The large model plane contains some type of deadly material; you see the HAZMAT suits on the men that loaded its cargo. You have seconds before the plane climbs into the air and banks over the stadium.

Watching the national and international news and reading reports of Islamic fanaticisms, my imagination conjured up a conflict between my stock characters- particularly Webb, the Russian, and the sinister forces within the body of Islam. I watched a Muslim family shopping in a Wisconsin Costco; the man in black beard, shirt and pants, the woman in a full black Burka and the elementary aged kids dressed like any kids. I thought of the conflict our society and their religion must bring to their home. I thought the man and woman looked very sinister- a totally stereotyped and prejudiced emotion.

Because ignorance breeds prejudice, I felt I needed to study Islam. I read the Koran- actually an English translation. I didn’t find it incomprehensible or incoherent as many scholars have written- actually some of the science was far more accurate than the Bible. But it was definitely scary. It clearly calls for the Islamic believer to kill, enslave or tax the non-Muslim. I stopped counting the admonitions against non-believers at forty- I believe the total count is over one hundred.

I found when Arabic is translated, the same word can be spelled many ways- a practice I have followed with my English all my life. The tax on non-Muslims can be spelled: Jizia, Jizya or Jizyah. The Koran can be spelled five ways.

The Telemaster model plane with a drop box and the Polonium-210 are all real and combine to represent a plausible threat. I hope our government forces that are working to protect us are specked on these technologies.

The Grand Jury system is unique to our country and our Federal law.

The ineffective Federal prosecution system led by our Attorney General is actually worse than I wrote.

I took the phrase, “The arbitration of the sword,” from Churchill- who had very definite views from his 19th and 20th century view of Islam. Arbitration is settling out-of-court, the sword means you don’t reason with a fanatic.