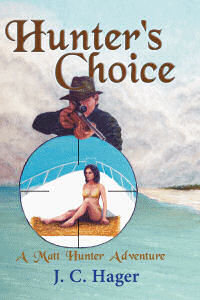 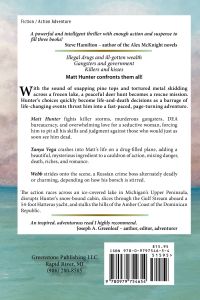 “An action/adventure rollercoaster of a suspense thriller.”

“An inspired, adventurous read I highly recommend. I can’t wait for his next book.”

“A powerful and intelligent thriller with enough action and suspense to fill three books!”

You’re deer hunting. Your future is as cloudy and unsettled as the blizzard coming in. A plane crashes. In it are two treasures: dope worth millions and a woman of incalculable value. If you turn in the drugs you lose the woman.

Hunter’s Choice has been bouncing around in my head for thirty years. It’s about finding something valuable. Do you return it or not? If it is valuable only through illegal channels then what? What if returning it gets you in trouble but going to the law can lose you another treasure—a woman you love?

Many years ago a plane went down near Curtis, even though the search was skilled and thorough, it wasn’t found for 13 years, and then by some bear hunters. What place is even more deserted than the Curtis area? Mackinac County and the Fiborn Quarry area is the answer; it is a very lonesome place. I hunted out of Garnet for many years from Grandma McGillviray’s cabin. My first wife’s Grandmother was a rare and wonderful woman. She cooked in logging camps and ran the boarding house at the Quarry for most of its existence. She raised four children at the quarry in the 1920’s.

I took Grandma McGillviray to the quarry each fall and she reviewed the history and buildings with me. It has the romance of a Roman ruin. I hunted deer and partridge around the pit and beaver ponds, never seeing another hunter.

So, I put the lost plane at the quarry, added a blizzard to keep the characters isolated and used satellite communication to link the bad guys to the isolated cabin.

Getting a crime boss to get close to drugs is a complexity and a plot stretch. It had to be a Russian crime boss. They sometimes get hands-on with the products—in fact; one was arrested helping to unload a boat load of cocaine in New York Harbor.

My Russian is renamed Webb. Why? Russian names are hard to pronounce and I hate stories where the people’s names are difficult to say or remember. I modeled Webb after a few real Russian Mafia bosses. They are smart, educated, and ruthless, willing to do anything to make lots of money. There is another twist about an incriminating money trail document that might satisfy a critical reader for Webb’s involvement (check out the gym bag).

One snowy, blowy, thirty below morning I sat down to type and all my characters went south. The original plot was about the Russians fighting Hunter in the snowy forest on his home turf. He would use chain sawed trees to block roads, running them around in cedar swamps—getting them wet and cold and winning the day with all the skills of a consummate UP hunter pitted against some Russians that know more than a thing or two about winter and winter war. But this story may have to come later.

The lure of the Keys and the warm waters of the Bahamas took my characters and my mind. I couldn’t stop the plot and the locale change. I had to do more research and find a yacht on the internet. A goldmine of information, the internet had logs of various boats sailing the very waters plied by the Reefer. I used the Holiday Isle marina for a base; I’ve been there many times and dived in all the places mentioned. The Bahama run touched many ports I’ve visited. Being at sea and being in deep woods hold many similarities for me. You need to know where you are and where you are going. Danger can pop up at any time. Panic is deadly. Preparation and experience make the journey pleasant. Snug cabins or harbors are worthy rewards for the stalwart traveler.

My best buddy is Archie Davies; a 40 year veteran of the Coast Guard and a Master Chief, (E9). I had him featured in a chapter called, Sea School, which we cut. (Editing can be brutal.) I visited him in Puerto Rico for over a week a few years ago. He worked in drug interdiction, and was highly successful. We talked hours about his experiences, spending time at the docks watching 18 year olds go from their quarter million dollar open boats to their BMW’s, checking their gold Rolex as they made cell phone calls. (The profit in illicit drugs is almost as great as those realized by the large pharmaceutical companies that constantly bombard us with their TV ads.) The boat tricks and types as well as the Venezuelan connection came from our talks.

The interplay of the characters was fun. I couldn’t make Webb totally mean and rotten. Matt went along with and freely preformed illegal activities. Tanya played games with everyone, but hey, she’s a fox.

The only blatant moral lesson was issued by Webb when he tells Matt to, “live your life so you don’t need bodyguards.”

My inspiration and various techniques were influenced by my favorite writers: E. Leonard, K. Follett, J.D. MacDonald, W.E.B Griffin, W. Smith, C. Cussler, D. Francis, Jack Higgins, J. Sanford, James W. Hall, T. Clancy, J. Grisham, S. Hamilton and W. Michener. Anyone who hasn’t read all the works by these authors is very lucky, because they have treats ahead of them.